The Order asserts its international and ecumenical character and, in its capacity as an International and Ecumenical Order of Chivalry, its staunchly advocates and defends the ideal of free world and the rights of man. 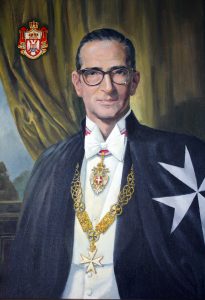 Fons Honorem King Peter II, the exiled king of Yugoslavia and direct descendant of Czar Paul I, became Protector of the Order in 1962 and granted a Royal Charter through his Fons Honorem, to the independent, international order on March 19, 1964. King Peter II himself served as Grand Master from 1965 to 1968.History and Goals The Hospitaller Order of Saint John of Jerusalem Knights Hospitaller is a successor of the ancient Order of Saint John, which was founded by the crusaders around the year 1050 AD. HOSJ is an ecumenical and independent Chivalric body of Christians.

The Grand Master and the Sovereign Council

The Hospitaller Order of Saint John of Jerusalem Knights Hospitaller is a non-profit, tax exempt organization governed by the Sovereign Council. It shall be required to meet at least once every two years. The Grand Master is elected to a four year term by the Chapter General, which consists of all the Knights and Dames of the Order. The Grand Master shall act as Chairman of the Sovereign Council. The organisation of the international Order is according to geographic lines with the Grand Priories in the U.S.A., Canada and the countries around the Baltic Sea.

The Grand Priories and the Commanderies

The Grand Priories are made up of local Commanderies which are responsible for the most of the charitable service and social activities of the Order.

Investiture ceremonies for the induction of new members as well as advancement in rank occur annually in each Grand Priory. A new member usually enters as a Member/Jurat and is advanced to Companion and finally to Knight/Dame as these ranks are earned.